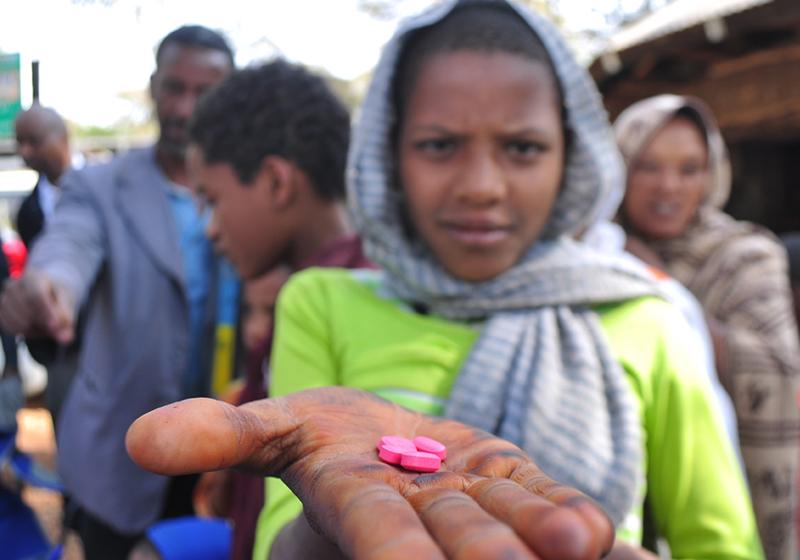 On a bright and clear morning in Srinka village of Habiru district in the remote and mountainous North Wollo zone of the Amhara Regional State of Ethiopia, thousands of community members, schoolchildren, and health workers gathered expectantly for the launch of the 16th Trachoma Week supported by The Carter Center and the International Trachoma Initiative (ITI), both institutional partners of Emory University. The head of the Amhara Regional Health Bureau, who understands the urgency to prevent trachoma, administered the first dose of the antibiotic Zithromax® (azithromycin) to a schoolboy that day.

This event, which took place on May 22, 2016, marked the ceremonial kickoff of a week-long campaign to control trachoma by targeting approximately 7.4 million individuals across 70 districts in Amhara to receive a dose of the antibiotic donated by Pfizer Inc. through ITI.

To support the government of Ethiopia’s goal of wiping out blinding trachoma in the country’s most trachoma-endemic state, Trachoma Weeks bring together communities and core partners such as the Amhara Regional Health Bureau, the Ethiopian Federal Ministry of Health, Lions Clubs of Ethiopia and Lions Club International Foundation, as well as The Carter Center and ITI. For the May launch, all of these partners were in attendance, along with government officials.  “The program has worked miracles for the local people,” says ITI Director Paul Emerson, PhD.

Trachoma is a bacterial infection of the eyes which, if left untreated, can lead to terrible pain and irreversible blindness. People exposed to a continuous cycle of infection, healing and reinfection develop scars on the inside of the eyelids. As a person ages, the scars shrink, pulling the eyelid so tight that the eyelashes turn inward, causing  scratching on the surface of the cornea with each blink. This leads to excruciating pain and eventually loss of vision.

Trachoma is targeted for elimination as a public health problem by the year 2020, and in order to achieve this goal, the Global Alliance for Elimination of Blinding Trachoma has implemented an integrated control strategy known by the acronym SAFE: Surgery, Antibiotic therapy, Facial cleanliness and Environmental improvement. The intensity of trachoma in a given community is based on the frequency of clinical signs detected in children under the age of nine years. In 2007, when the trachoma control program began in North Wollo, the prevalence of symptoms in this age group was over 50 percent. After seven years of intense intervention, it is now down to 30 percent, putting the goal of fewer than five percent of children showing clinical signs of trachoma within reach. This success can be attributed to the diverse partners working on the ground to fully implement the World Health Organization (WHO)-recommended SAFE strategy for trachoma control.

“Targeting 7.4 million people for treatment across five zones in 70 districts within one week sounds like an impossible task - but it is not,” says Kelly Callahan, Director of the Carter Center’s Trachoma Control Program. “It is the result of hard work and planning by many people on four continents. The annual cycle of Zithromax® donation starts with an application from the country to the ITI. Applications are carefully reviewed by an international expert committee who then make a recommendation through ITI to Pfizer Inc. to donate the drug. With a multinational production process, the finished product is donated to the ITI, which coordinates shipment of the drug in the correct quantity, to the correct place, at the correct time from the European Logistic Center, and when it arrives in the capital of Ethiopia, Addis Ababa, it is then expedited through Customs by the Ethiopian Federal Ministry of Health and typically sent straight out for distribution.”

Within Ethiopia, the ITI country office works with the Amhara Regional Health Bureau, the Ethiopian Federal Ministry of Health and The Carter Center to plan the timing and location of the distribution to the Amhara region. The Carter Center country office works with partners at the Amhara Regional Health Bureau on a micro-planning schedule that involves the recruitment and training of around 6,300 health workers and supervisors and about 20,000 volunteers. Each distribution team is led by a government health worker – called health extension workers – who works with the Health Development Army volunteers in order to provide access to the drug to everyone. The Health Development Army is a relatively new initiative in Ethiopia in which women leaders pledge to work on a voluntary basis to aid the development of five neighboring households. By working with this indigenous grass roots movement, it is relatively easy to call each of 7.4 million individuals by name to step forward and take their medicine.

The Lions-Carter Center SightFirst Initiative, representing a partnership of the Lions Clubs of Ethiopia, the Lions Clubs International Foundation and The Carter Center, was founded in 2000 to eliminate blinding trachoma as a public health problem in Amhara. The Amhara region has the highest known trachoma burden in the world, with the greatest number of trichiasis cases in Ethiopia. Over the past 15 years, the program has expanded to full geographic and operational scale, now reaching even the most distant woredas – districts – in the Amhara region, with the WHO recommended SAFE strategy. Over 130 million doses of the donated antibiotic have been distributed in the Amhara region since the inception of the program, totaling about one-quarter of the global distribution of over 500 million doses  donated by Pfizer Inc. In addition to drug distribution, The Carter Center assists the Regional Health Bureau and the Federal Ministry of Health in Ethiopia to train and equip thousands of health extension workers and teachers, as well as surgeons who operate on patients with late-stage blinding trachoma. This collaboration is a true partnership, whereby the Amhara Regional Health Bureau serves as the primary implementer of the project with technical assistance, coordination of logistics, financial assistance and advocacy provided by The Carter Center and ITI.

“One of the greatest public health challenges we face today is the ability to address issues at a community level, and the role of public-private partnerships in responding to this dilemma – particularly in the face of trachoma – is critical,” says Darren Back, Senior Director of Social Investments and Corporate Affairs, Pfizer. “The world is changing rapidly, and we need to change with it by collaborating with leaders in global development to break down the barriers that individuals face locally with regards to accessing the medicine they need.”

The ITI, based at The Task Force for Global Health, is working to provide the donated azithromycin to people at risk of blinding trachoma in 32 countries. ITI has three pillars in its work to empower trachoma-endemic countries to eliminate the disease and support the global program: stewardship of the Zithromax® donation, management of data for the global program, and developing partnerships. In 2016, ITI plans to ship over 100 million doses of of the donated antibiotic for trachoma control, and as of mid-June 2016, is on target, having shipped 52.5 million doses.

Trachoma is endemic in an estimated 1,514 districts in 52 countries around the world, with active programs aimed at eliminating it as a public health problem taking place in approximately 1,200 individual districts. There has been considerable progress towards the goal of eliminating trachoma by 2020, and The Carter Center and ITI are among the lead partners in this magnificent effort.