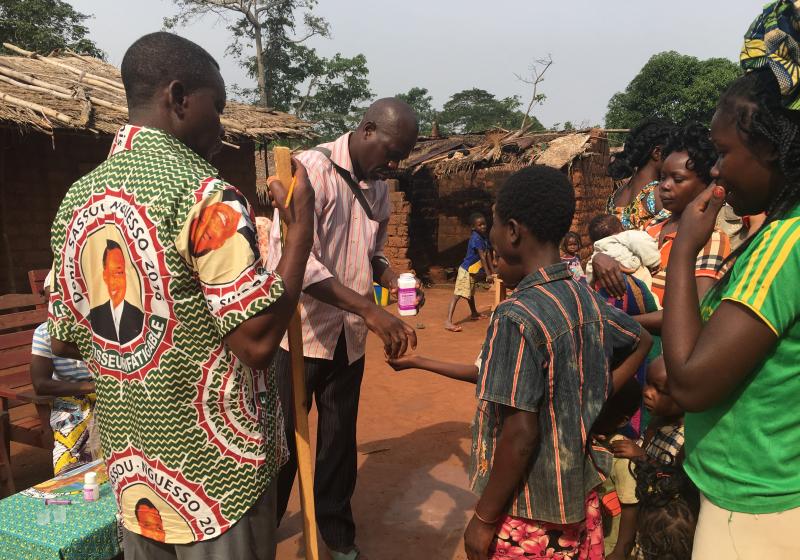 Six months into my position at The Task Force’s International Trachoma Initiative (ITI), I had the opportunity to visit the Central African Republic (CAR). I was invited to observe the country’s annual mass drug administration (MDA) of Zithromax® for the control and elimination of trachoma as a public health problem. This was the first time in five years that a member of the ITI team visited CAR, so I jumped at the opportunity.

CAR received its first shipment of Zithromax® in 2013 – one day before its capital, Bangui, fell to rebel fighters. The war that followed displaced more than a quarter of CAR’s population and delayed the trachoma elimination program indefinitely. I was a Peace Corps volunteer across the border in Cameroon from 2013-15 and learned about the tragedy in CAR through snippets of news and conversations with my Cameroonian friends and colleagues. While I was a volunteer, the conflict displaced roughly 300,000 people from their homes in CAR, forcing them across the border into Cameroon.

In recent years, CAR has become more stable, but remnants of the conflict remain. Following a cease-fire agreement in 2014, CAR’s trachoma elimination program was able to resume in 2015 with the country’s first MDA. Trachoma prevalence in the country is high, likely exacerbated by the conflict and migration of refugees. In one region, more than half of children ages 1-9 have active trachoma infections.

When I arrived in Bangui, the capital of CAR, the first week of January 2017, I was greeted at the airport by my counterparts from CAR’s ministry of health, Dr. Georges Yaya, Hyppolite Mamadou, and Fred Dandingham. Driving through Bangui, the conflict is easily visible. Every 10th car bears “U.N. (United Nations)” insignia and U.N. tanks are at each major intersection. We did not stay in Bangui long. Within a few hours of my arrival, we left the capital behind and drove toward our first destination of Mbaïki, where the training of distributors for the MDA would take place.

Training took place over two days, covering all the information that a community distributor would need to educate their communities on trachoma and perform their distribution duties. I was thoroughly inspired by the team’s energy, knowledge, and commitment. Dr. Yaya repeated everything in Sango, the local language, in addition to French, capturing his audience’s attention. By the end of the training, participants were convinced not only of the importance of eliminating trachoma, but of the importance of ophthalmology and eye health in general. It’s hard to believe that CAR has only six ophthalmologists – Dr. Yaya being one of them – for a population of 4.6 million people.

When we went deeper “into the bush” to observe the MDA in Mongoumba, which borders both the Democratic Republic of Congo and the Republic of Congo, I began to understand just how far my counterparts would go to achieve a trachoma-free world. We were hours from electricity, running water, Internet, and comfortable beds. And yet, they continued to work, advising the distributors on the best strategies and giving educational talks during the distribution. They would have done the same if I wasn’t there – this was just another day of work for them. The way Dr. Yaya, Hyppolite, and Fred work together is a model for team work in public health. Dr. Yaya juggles multiple commitments as a professor and clinician, while still finding time to be the national coordinator for eye health. Fred is excited about technology and data, and Hyppolite is confident and gregarious in any situation.

Ultimately, more than 300,000 people were treated during the MDA – the first step in their goal to reach 2 million people through MDA in 2017. Going forward, I will be motivated by my colleagues in CAR. I will strive to be dedicated, tenacious, creative, and optimistic like them. And I won’t make excuses. Somewhere in CAR is a team working together despite war, lack of resources, and little recognition, because they believe in a world without trachoma.