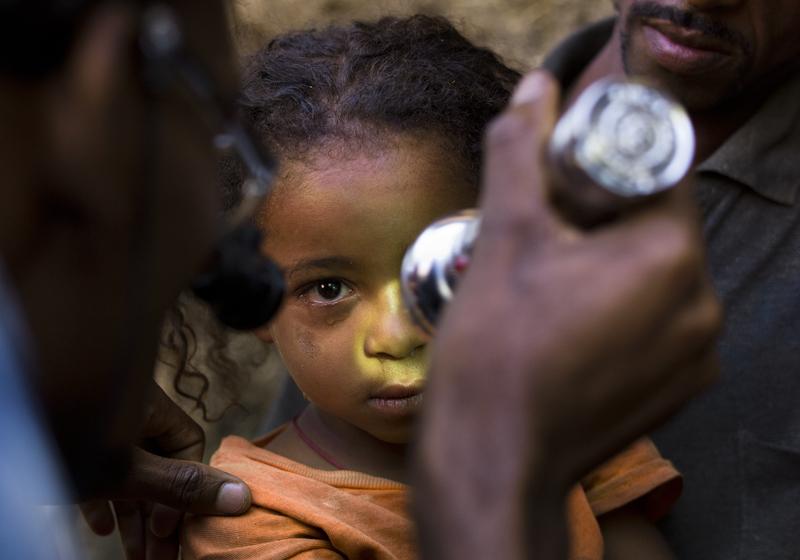 The Global Trachoma Mapping Project (GTMP), funded by the UK government, is using mobile technology to support the elimination of the blinding disease trachoma by mapping its global prevalence.  As the project reaches its second anniversary its initial scope of work has nearly been completed, with 94 per cent of the identified districts surveyed nine months ahead of schedule and under budget.

In 2012 a consortium of NGOs and academics led by Sightsavers, the London School of Hygiene & Tropical Medicine, and the International Trachoma Initiative (ITI) secured £10.6 million from DFID to globally map the neglected tropical disease (NTD) trachoma by March 2015.  This project is part of a global push to complete trachoma disease prevalence mapping, an essential stage in achieving the World Health Organization’s (WHO) goal of eliminating the disease by 2020.

This mapping project has involved the global roll-out of a standardised assessment process which uses trained eye health workers and a smartphone.  Survey teams visit and examine people living in a sample of communities within pre-identified districts and capture data on the presence of the disease.  This is then used to update Ministry of Health trachoma action plans and the Trachoma Atlas – an ITI tool for tracking the global burden of trachoma.  Essential data about water and sanitation access are also captured.

Trachoma, a painful and infectious eye disease, causes blindness.  An individual’s eyelashes turn-in and rub the cornea, eventually leading to scarring and loss of vision. Prior to the GTMP, it was known that over 110 million people lived in confirmed trachoma-endemic areas in some of the world’s poorest countries, and another 210 million people lived in areas where insufficient data had been gathered, but where there were strong indications that trachoma was present[1]; hence the urgent need to complete the mapping.

To date GTMP has worked with its partners to:

The data collected are helping Ministries of Health to plan their trachoma intervention programmes to eliminate trachoma in line with the WHO-recommended “SAFE strategy”3.  The data gathered so far are already helping to guide requests for the antibiotic Zithromax® (donated by Pfizer), to help health workers plan for surgeries, and establish approaches for improvements in access to water, sanitation and hygiene (WASH).  The UK government has also recently announced an investment of £39 million to help support the implementation of the SAFE strategy in a number of countries across Africa, including Ethiopia, Zambia and Tanzania where the disease is highly endemic.

“One of the biggest challenges of mapping trachoma has always been reaching the remote areas where prevalence of the disease is suspected.  It is therefore a huge achievement to have designed a standardised programme that is rapidly delivering this.  Collaboration, partnership, quality and a standardised approach have been key in mapping the identified districts in just two years.

“GTMP has delivered nearly half of all the trachoma surveys that have ever been conducted, and faster than anticipated.  The number of districts will continue to grow as the remaining funds are used to expand the project scope to include more districts, further filling in the blanks on the Trachoma Atlas.”

As a result of the success of the project mapping districts faster than planned, 50 per cent additional districts will be added into the project scope between now and March 2015. By then it is anticipated that 100 per cent of all districts that requiring mapping will have been covered.  The DfID-funded GTMP is in collaboration with USAID-funded partners to achieve these goals.

In some countries GTMP has also successfully worked with the Ministry of Health, and other donors to collect data on the prevalence of other NTDs.  One such example is in Nigeria where data on schistosomiasis, STH and lymphatic filariasis have been captured.

“GTMP has had a huge impact on our understanding of the global distribution of this disease.  The accurate data collected will lead to more efficient and effective interventions; vital when time and resources are limited.  For example, in Ethiopia mapping has revealed one of the highest levels of active trachoma, exceeding previous estimates.  However we now have a clear picture of the resources required to tackle this.

“Ministry partnership, donor collaboration, strong teams of graders, recorders and epidemiologists combined with strong managerial and technical structures have made it possible for a deeply committed consortium to deliver these results, and ultimately provide a pathway toward elimination in the next five years.”