WHO Alliance for GET2020 Awarded Global Partnership Award 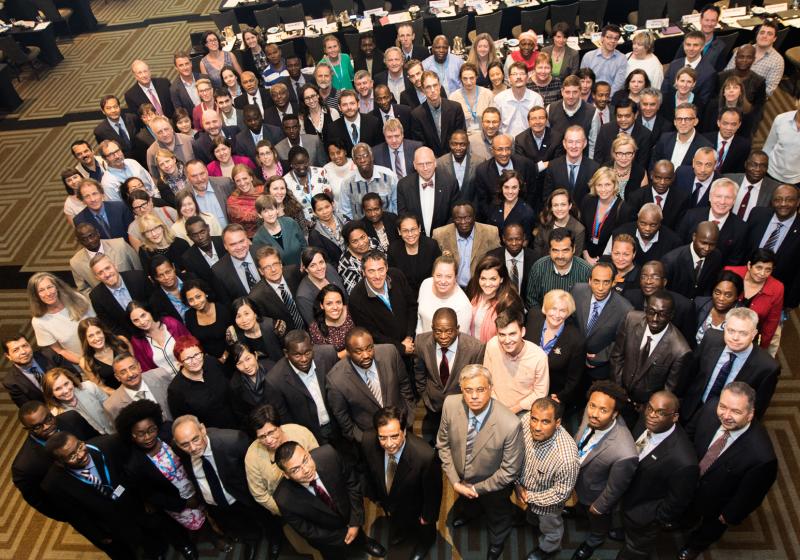 The WHO Alliance for the Global Elimination of Trachoma by the year 2020 (GET2020) has been awarded the ‘Global Partnership Award’ at a glittering event in Durban.

The International Agency for the Prevention of Blindness is holding its 10th General Assembly, hosting more than a 1000 delegates from across the globe and at its Opening Ceremony, attended by the President of Liberia, Dr Ellen Johnson Sirleaf and the Minister of Health, South Africa, Dr Aaron Motsoaledi, key eye care professionals and organisations have been honoured for their contributions to blindness prevention.

Accepting the award was Dr Anthony Solomon, Medical Officer for Trachoma at the World Health Organization, and Secretary to the WHO Alliance for GET2020; Professor Serge Resnikoff, Vice Chair of the International Coalition for Trachoma Control; Dr Astrid Bonfield, Chief Executive, the Queen Elizabeth Diamond Jubilee Trust; and Professor Assumpta Lucienne Bella, Coordinator, Programme National de Lutte Contre la Cécité, Cameroun. Dr Solomon said, “The WHO Alliance for GET2020 has been working in partnership against trachoma for twenty years, and with a small amount of additional investment and a lot of hard work, is now poised to achieve its objectives. This award is a testament to the incredible collaboration that has been fostered within the Alliance, which has paved the way for saving the sight of millions of people around the world.”

The Alliance was established by WHO in 1996 and now has more than 100 partners in at least 58 countries. It is the principal platform through which the trachoma community works to deliver WHO’s recommended SAFE strategy (Surgery, Antibiotics, Facial cleanliness and Environmental improvement) – an approach backed by the 1998 World Health Assembly resolution WHA51.11.

According to the latest WHO data, 12.4 million children worldwide have active trachoma, more than 200 million people are at risk of trachoma blindness and 3.2 million people need surgery for trachomatous trichiasis. We know this because in January 2016, partners from the Alliance completed the Global Trachoma Mapping Project, which involved examination, by certified graders, of 2.6 million people in 29 countries in three years, to provide programme-ready high-quality data on trachoma prevalence for 1,546 health districts. It was the world’s largest ever multinational survey of an infectious disease.

In response to the challenges identified in 2020INSight, a report released in 2011, members of the Alliance have united to drive the momentum for elimination: promoting it within the context of universal health coverage and as a tracer for poverty alleviation within the Sustainable Development Goals, as well as enhancing national ownership and partnership for elimination efforts.

The ‘Blueprint for action’ in Eliminating Trachoma: Accelerating Towards 2020 is a practical demonstration of the collaboration and cooperation fostered by these partners, whose contributions continue to increase year upon year.

Without this multisector association, hundreds of millions of people worldwide would be struggling to see an end in sight.